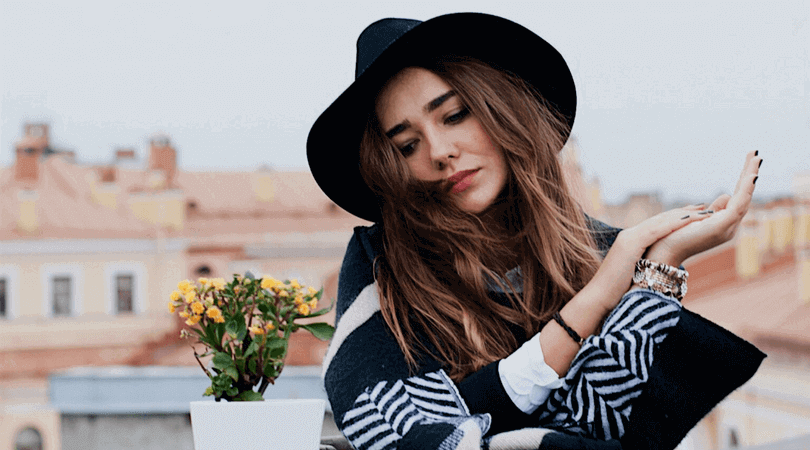 If you are in a relationship with a guy who is not nice to you, you have to get honest with yourself and ask why you would stay in this kind of relationship.

His being a jerk has nothing to do with you. Where your role comes in is why you would even consider putting up with his unacceptable behavior? What does that say about you if you put up with it?

First, you need to let him know that his behavior is inappropriate (and give examples) in a calm but assertive way.

I would do this when he is calm and not acting out. Remember, your guy is someone whom you have put your loyalty and trust in.

There is also a difference between someone who may be a jerk sometimes but once you call him out on his poor behavior immediately, and he genuinely apologizes for his behavior, as opposed to an emotionally abusive partner.

If your partner is emotionally abusive and puts you down, be sure to remove yourself from the situation right away. Be honest with yourself and differentiate if he is a nice guy who just gets mean sometimes. None is acceptable, but if he’s truly a great guy whose behavior is out of line, and he is willing to change his behavior, there is a chance the relationship could work. He could use some help with communication skills. Nevertheless, he needs to be confronted so he can realize how he has behaved and make the necessary changes.

It can also be helpful to talk to someone who is objective such as a counselor, clergy, and can guide you on some helpful ways to cope with this.

If in time he does not make changes, you will want to consider ending the relationship. You deserve to be treated with honor and respect and nothing less. If he doesn’t change you will only dig a deeper hole by staying and remember, you are worth more. It’s a good rule of thumb to take some space. You will know in time if he has changed. If he chooses not to change, remember that he is the one who needs help and you cannot do it for him.

Learn to let go and move on to someone who treats you with the kindness and respect you rightfully deserve.

The list could go on and on as to why someone is being a jerk.

Being a jerk is a total abdication of the relationship agreement.

It may be unspoken, but your partner should get the best of you and vice-versa.  That’s what builds trust between people- knowing that you have each other’s backs.

People often aren’t at their best when they’re struggling with something.

Adversity is an opportunity to communicate what is needed in a difficult time, not an excuse to be emotionally abusive.  Your partner may not be able to be as there for you as you would like, but he always needs to treat you with respect.

It’s interesting that we often treat the ones we love worse than we treat anybody else.

I don’t know why that is; maybe we take for granted that our partner will be there so we feel freer to act out our negative emotions.  While neither of you may  end-up leaving, don’t think that mean words or actions are forgotten. They aren’t.

You may forgive, but you won’t forget.  You will know that in times of stress you are with someone whom you can’t trust to manage himself.  Every time civility breaks down, the relationship becomes a little less safe.

Self-regulation is one of the foundations of a good relationship.

You both need to work on that skill to have a happy, healthy future together.

# Explore the 3 options below

Just to be sure that we’re talking about the same thing, let’s look at two definitions for the term “jerk”.

A jerk is an unlikable person; especially one who is cruel, self-centered, rude, or small-minded. (Merriam Webster Dictionary)

Jerks are selfish and manipulative They see women as little more than sexual conquests to brag about to their buddies or mere objects that are there for their personal pleasure. (Urban Dictionary)

If either or both of those definitions resonate for you, then continue reading. If they don’t, keep reading anyway as you might find this interesting.

So, what should you do? It seems to me that you have three options for dealing with your BF’s behavior:

Option 1: You could invite him to change by speaking honestly and openly to your him. This involves:

Option 2: You could take your leave and exit stage right. Or, to put it inelegantly, you could dump him. In this scenario, you’ve decided that you’ve had enough and that the best choice for you, in terms of your own sanity and wellbeing, is to finish the relationship. You may or may not wish to let him know your reasons.

Option 3: You could do a combination of 1 and 2.  If you’ve given Option 1 your best shot and his behavior doesn’t change, you might then decide that, for sake of your own sanity and wellbeing, it is best to cut ties.

So, what it boils down to is this:

If you know (I mean really know in your bones) that you deserve better, then you need to require better.  Requiring means that you’ve set a higher standard for yourself when it comes to relationships.

But if you don’t know for sure that you deserve better, then you have some serious work to do on yourself.

# Look at the situation from your best friend’s perspective

There are many ways of being a jerk, so to figure out what you want to do, it helps to identify what kind of jerky behavior he’s doing.

Is it thoughtlessness, poor communication, not following through, just being a guy and doing guy things when you want him to be with you? These are all pretty normal behaviors to deal with in any relationship.

These situations usually require you to speak up and let him know how you feel and what you’d like to be different. Of course, be sure that you don’t do it in a manner that’s blaming, sarcastic, or attacking. Calmly tell him the behavior you want changed, how the behavior feels to you (again no blaming), and finally what you want different. Think of it as a discussion, not a conflict.

However, if the behavior is attacking, blaming, emotionally over-reactive, controlling, insulting, demeaning and really hurtful, you’ll need to consider your reaction more carefully.

First of all, tune into your own reactions and see how you’re responding.

Do you feel shocked, overwhelmed, breathless, heart racing, even scared or tearful? These are indicators that you’ve just been emotionally slapped. It’s emotional abuse.

Sometimes it’s hard to identify emotional abuse in someone you really love. It can be easy to make excuses for him—He’s under a lot of stress; he’s had a bad day; he doesn’t really mean it. But if you’re thinking you want to spend your life with him, keep in mind he’ll have many bad days and situations to deal with in the future. Ask yourself, is this the way I want to go through difficult times with him?

If you find yourself worrying more about his feelings in those moments than your own feelings, you’ll need to take some time to pull your energy back into yourself and ask yourself what YOU think about his behavior. How do his behaviors fit into what you want to deal with in your life? What do you want him to do about the behaviors? Are these behaviors part of a pattern you’re seeing in him? How capable and how motivated do you think he is to change these behaviors?

Look at the situation from your best friend’s perspective.

What would she say? How would your family react if they saw these behaviors in him? This will give you some objectivity.

We all want to assume that a loved one will want to change their behaviors to make our relationship with them more peaceful and compatible. But some people’s behavior patterns are too built into their personality to be able or willing to change. Asking him to change will give you some clues as to whether he’s likely to change.

If he reacts calmly, considers what you’re saying, apologizes with concern for you, and reduces the behavior or eliminates it within a month or two, then great!  If, however, he responds with anger, more attacking, blaming you, coldness, spite, etc, then you should seriously look at the fact that he’s really not willing or perhaps not able to change how he reacts. So the future of your relationship is more likely to be in question.